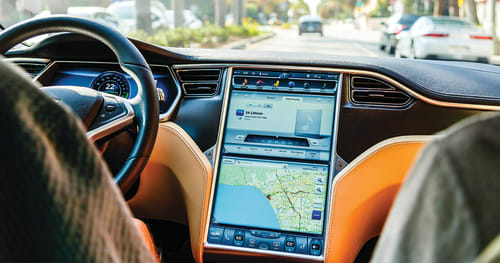 The answer is, probably a long way off. Just two short years ago, the automotive industry was full of news about autonomous cars, with some manufacturers saying they would release consumer models as early as 2019.

So, are autonomous cars really safe? With the current level of technology available, probably not.

Here’s what you should know about self-driving vehicles.

The current word on fully self-driving or autonomous cars in March 2020 is that they’re at least a decade away. The sensors, AI and tech available today just can’t create a car that can drive itself without human intervention. According to CNN Business, “It’s hard to prove they’re safe. Their sensors struggle in bad weather. Some experts believe the vehicles won’t go mainstream without a technological breakthrough.”

When that breakthrough might come depends on who you’re reading, but some put it as far as 50 years away.

Sure, humans make mistakes behind the wheel. But we also have the ability to interact with other drivers safely. Think about it — when you merge into traffic or negotiate a four-way stop, how much depends on a nod or hand-wave from your fellow drivers? Without a human behind the wheel, that type of interaction and so much more is lost, creating potentially unsafe conditions.

With autonomous vehicles quickly taking a backseat, the new industry buzz is centered on advanced driver assistance systems (ADAS). These automated driving features aim to make human drivers safer with the help of technology, not to eliminate human drivers altogether. It’s the best of both worlds!

At Tint World®, we can help add safety features to your vehicle even if they didn’t come from the factory. Backup cameras, dash cams and hands-free car audio are just a few of the ways we can make your car safer, and add that futuristic feel until we get our self-driving cars. For more information, contact your local Tint World® today.