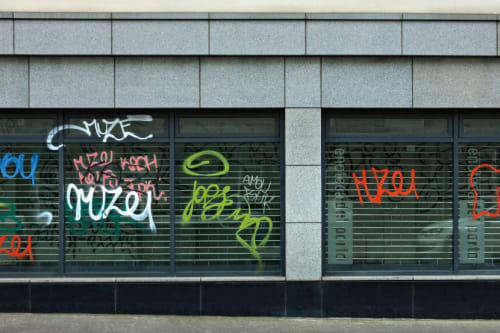 One person’s art is another person’s trashed property.

While most talented, bonafide street artists will use dedicated walls in some cities, there’s always some tagger out there to blast painted nonsense on your business windows. Tint World®’s anti-graffiti film and coatings can help you fight vandalism and save money in the long run.

Graffiti vandalism comes at a cumulative cost to American businesses of some $12 billion per year. On an individual level, it can cost upwards of $7 per square foot to remove graffiti – replacement of entire windows can go considerably higher. Tint World® can help prevent those bills ahead of time with our anti-graffiti film and coatings.

Simply put, the film deprives vandals of a permanent canvas on your storefront’s glass windows or facades. The film is about 5-mm thick and has a scratch-proof surface that is easily washable with regular window cleaners. But when dope865 or Tdawg17 decides to leave a painted calling card, the film can be peeled off and replaced at a much lower cost than a new window pane.

Our anti-graffiti and anti-scratch films and coatings mean the vandal is only damaging the film, not the window itself. The film also offers the added benefit of holding your window together if it should be more seriously vandalized or damaged – potentially dangerous glass shards won’t go flying.

Aside from business owners, homeowners in urban environments can use the film to protect their property, and municipalities can use it to protect public property such as bus stop shelters.

So deprive your neighborhood tagger of a permanent canvas, and posse up with us to fight vandalism today. Contact your local Tint World® today for more information on anti-graffiti coatings and films.